The origin of macaroni and cheese: I have to confess that until Saturday I was a bit of a Mac ‘n’ Cheese snob. The reason for this is that I have only seen and tasted this dish ready-made from the supermarket, or it may have been MacDonald’s.

The versions I had been used to seeing around America resembled what could only be described as a thick, gluey soup with macaroni lodged in it. The aroma and colour of Mac ‘n’ Cheese often had me saying to Enzo, “why do people want to eat this stuff and where does it come from? Is it Italian!?”

The origin of macaroni and cheese

Macaroni pasta must have originated in Italy, and so too the cheese. It has been well documented that pasta and cheese was being prepared during the Middle Ages and that medieval recipe collections often featured pasta dishes with grated cheese and spices. Even today it is common-place to dust cheese sauces with a little nutmeg.

Let’s have a Mac ‘n’ Cheese blast from the past starting with one of the first documented recipes dated 1367 – 1400 from the court of King Richard II of England, called ‘Macrows‘.

From Italy, Mac ‘n’ Cheese takes a trip back to England where a recipe entitled ‘To dress Macaroni with Parmesan Cheese‘ appeared in 1769:

It took some time to travel across the Atlantic where, following an idea from a St. Louis salesman to combine grated American cheese with macaroni, the Kraft company introduced their ‘Kraft Macaroni and Cheese Dinner‘ to America in yellow boxes.

Advertised as a meal for 4 in 9 minutes, at a price of 19 cents, a staggering 8 million boxes were sold in that first year. However, these numbers rapidly increased during World War II because it only used up 1 ration coupon per box. Here is the original Kraft recipe for ‘Macaroni American‘ from 1938:

OK, so I saved the best for last. One Thanksgiving in Formia, Italy, we had the honour of hosting Thanksgiving for some fine, upstanding Americans from the Navy. Ray-Jay, his lovely wife Sheree and their beautiful children. Although Ray-Jay had just come back after weeks of being away from his family, they still found time to whip up a few American delights to add to the table. One of those dishes was, yes you guessed it, Mac ‘n’ Cheese.

Those of you who know me well, will tell you that I often struggle eating pasta here in Italy. So how was it that along with a pile of turkey, vegetables and lashings of gravy, I managed to wolf down not 1, not 2, but 3 servings of Sheree’s Mac ‘n’ Cheese. The reason … because it was so darn good!!

I have truly discovered why America has a deep fondness for this particular comfort food, and the humble Mac ‘n’ Cheese has finally made it’s way into the kitchen here in Paradise for which I bestow upon Sheree many, many thanks.

I will be bestowing my thanks for the recipe with Sheree as soon as she is willing to share it … but don’t go holdin’ your breath now ya’all! 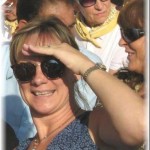